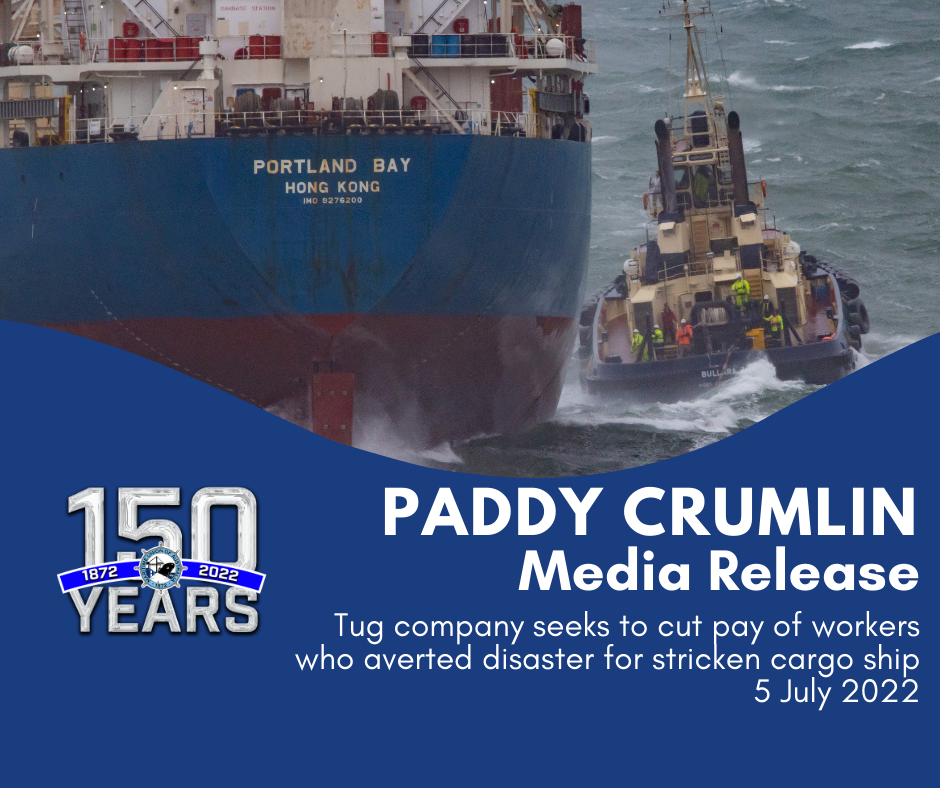 A repeat of the 2007 Pasha Bulker disaster was narrowly avoided with the swift action of skilled tugboat crew but one of the biggest players in the towage industry, SVITZER Tugs, is applying to the Fair Work Commission for the termination of their employees' collective employment agreement and seeking cuts to the pay, conditions and job security of over 600 tug boat workers around Australia.

The cargo vessel Portland Bay lost engine power in heavy seas off the coast of New South Wales near the Royal National Park early yesterday morning. Tugs including the SL Diamantina and SL Martinique from Engage Marine and the Bullara from SVITZER Tugs worked through the day and night to tow the 170 metre long cargo ship to safety so that engine repairs could be undertaken.

The Maritime Union of Australia’s National Secretary, Paddy Crumlin, praised the skilful work of the maritime workers who prevented a potentially tragic disaster.

“For a vessel of its size, adrift within one nautical mile of shore, there was a strong likelihood it would have run aground if not for the skilful intervention of towage workers aboard the tugs which were despatched from Port Botany and Sydney Harbour," Mr Crumlin said.

The cargo ship, which was unladen at the time it ran into trouble, nonetheless carries up to 1000 tonnes of fuel oil, which would cause an environmental catastrophe if the ship was damaged or ran aground.

"As tugboat workers employed by SVITZER are out in mountainous seas joining a flotilla of tugs saving a ship and its 21 crew from being smashed up on the rocks, SVITZER’s management are applying to the Fair Work Commission to strip these workers' pay and conditions," Mr Crumlin said.

"Incidents like today's daring rescue of 21 seafarers in wild seas demonstrate the importance of skilled, professional and experienced workers in such a dangerous, essential industry. SVITZER should stop seeking to cut their workers' pay and casualise their employment when it is these people we depend on in an emergency," Crumlin cautioned.

“SVITZER workers and members of ITF affiliated unions throughout the globe remain dismayed by the aggressive anti-union management strategy at a time that their parent company has posted a $22 billion profit and foreshadowed ongoing returns in this ballpark,” Mr Crumlin added.

At the recent Maersk AGM, ITF representatives identified SVITZER’s anti-union position as being in complete breach of an existing ESG commitment between the parent company and Danish and ITF unions representing stevedoring, shipping, offshore and port services worldwide.

“The international seafarers and dockers meeting in London last week condemned SVITZER for their actions, calling on Maersk to bring them into line with their existing commitments to labour standards, particularly freedom of association and collective bargaining. SVITZER is an international embarrassment to the Maersk parent company,” Mr Crumlin said.