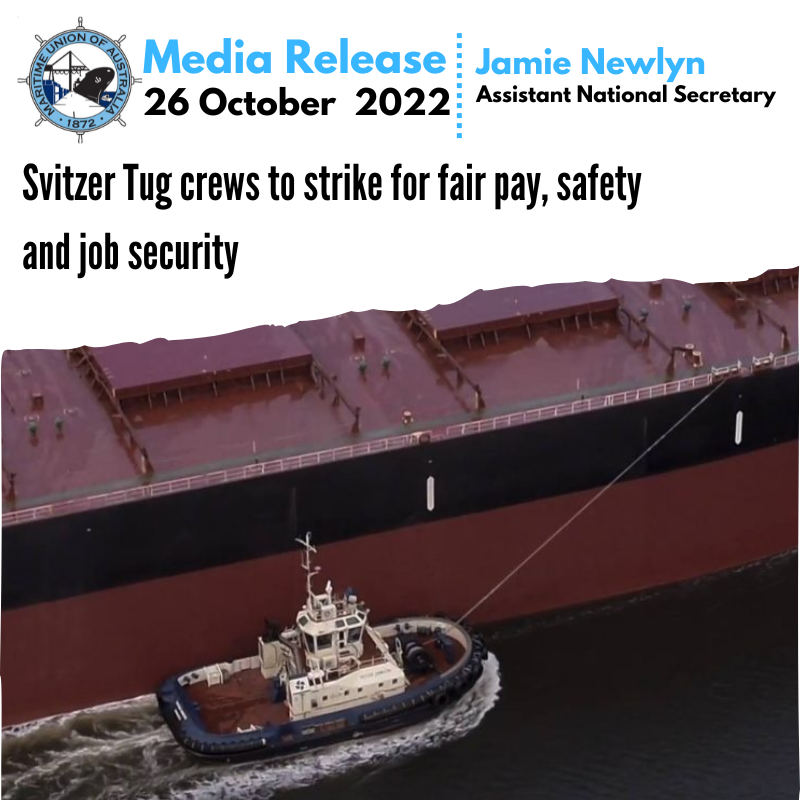 A valiant crew working on a Svitzer tug are once again being lauded as heroes for the recovery of yet another broken-down cargo vessel off the South Coast of New South Wales -- this time one owned by Svitzer's behemoth parent company AP Moller-Maersk. However, bosses at the multinational towage company are still refusing to negotiate in good faith for a new employment agreement that provides their heroic employees with fair pay, safety or job security.

Members of the Maritime Union of Australia employed around Australia at Svitzer towage will stop work today for four hours in an effort to highlight the failure by management to bargain in good faith for a new employment agreement.

The long-running industrial dispute has been caused by Svitzer management’s sustained failure to work cooperatively with their workforce and the Union to settle the expired Agreement, which lapsed at the end of 2019.

In the time since, more than 500 tug boat workers around the country have had an effective pay freeze while COVID has wreaked havoc on their industry and Svitzer’s parent company, AP Moller-Maersk, has reaped massive dividends numbering in the tens of billions of dollars at the expense of consumers.

“We are taking industrial action today in the face of a management team that seem determined to provoke and prolong disputation with their workforce,” said the Union’s Assistant National Secretary, Jamie Newlyn. “At every turn, we have sought to have a constructive negotiation with Svitzer, but the local managers of this multi-national giant have been determined to trash the negotiating process with what amounts to ideological attacks on its employees and their union,” he added.

With the Australian Treasurer, Jim Chalmers, signalling in the Budget last night that the former LNP Government’s policy of deliberate wages suppression has been abandoned, and Workplace Relations Minister Tony Burke already committing the government to reform of the Fair Work Act and calling out militant employers like Svitzer for unilaterally applying to terminate agreements with their employees, Svitzer is now on notice to return to good faith bargaining with its workforce.

The Union gave notice last week of the lawful industrial action that will occur today after negotiations last week once again failed to produce an outcome in line with industry standards, minimum safe crewing levels or important fatigue management frameworks.

“Svitzer want to casualise their workforce and undermine important measures which promote safety on the job and a work-life balance for our members, who already work around the clock on rosters that provide 24/7 operations, while at the same time manipulating and sabotaging the bargaining process in myriad ways throughout the past 36 months to avoid paying a fair pay increase. While Svitzer’s Australian managers have prevaricated, their Danish shareholders have profiteered,” Mr Newlyn said.

Svitzer turned over more than $350 million in 2019-2020 yet paid only 1.9c in the dollar as tax to the Australian community. They are a wholly-owned subsidiary of the multi-billion-dollar shipping conglomerate AP Moller-Maersk – which last year delivered a $US22 billion profit to its shareholders.

“Every dollar this company robs from their hard-working Australian employees by delaying this agreement is funnelled back to Europe without paying tax and without giving back to the Australian community. Their profits have soared off the back of their employees’ hard work during the COVID crisis, yet they refuse to share the bounty of these profits with their crew through a fair pay rise and decent working conditions,” Mr Newlyn said.

Another example of tug crew heroism at sea

In July, Svitzer crews joined the rescue of the stricken cargo vessel, the Portland Bay. At the time, the crews were hailed throughout Australia as heroes, including by the company which basked in the reflected glow earned for them by their crews. At the same time as their workers’ heroics prevented an environmental and humanitarian catastrophe, the company was seeking to terminate the employment agreement and throw the crews on to the Award, slashing their pay by 47%.

In recent days, another heroic rescue has unfolded at sea with the skill and experience of tug crews aboard Svitzer tugboats preventing another disaster.

“We rely on these hard working, skilled seafarers to perform tough, dangerous work at all hours of the day and night. The crew aboard the Svitzer Glenrock set sail into open ocean in often horrendous conditions, leaving their families behind, to do work which is rightly described as heroic, yet they come home to an employer that disrespects them, undermines their safety at work, and seeks to trash their quality of life,” Mr Newlyn said.

“Svitzer is a disgrace to Denmark, a country which stands for the fair-go just like Australia. We remind AP Moller-Maersk of the values and principles their company claims to hold and ask them to consider whether the Australian managers of their towage subsidiary can be allowed to continue bringing this international company into disrepute with this appalling, immoral and unjust campaign against the workforce,” Mr Newlyn said.

“The four hour work stoppage today should remind management where the company’s profits are actually earned – on tugboats driven by seagoing members of the three maritime unions, and these loyal workers deserve better treatment than what they’ve been subjected to these past three years,” Mr Newlyn said.