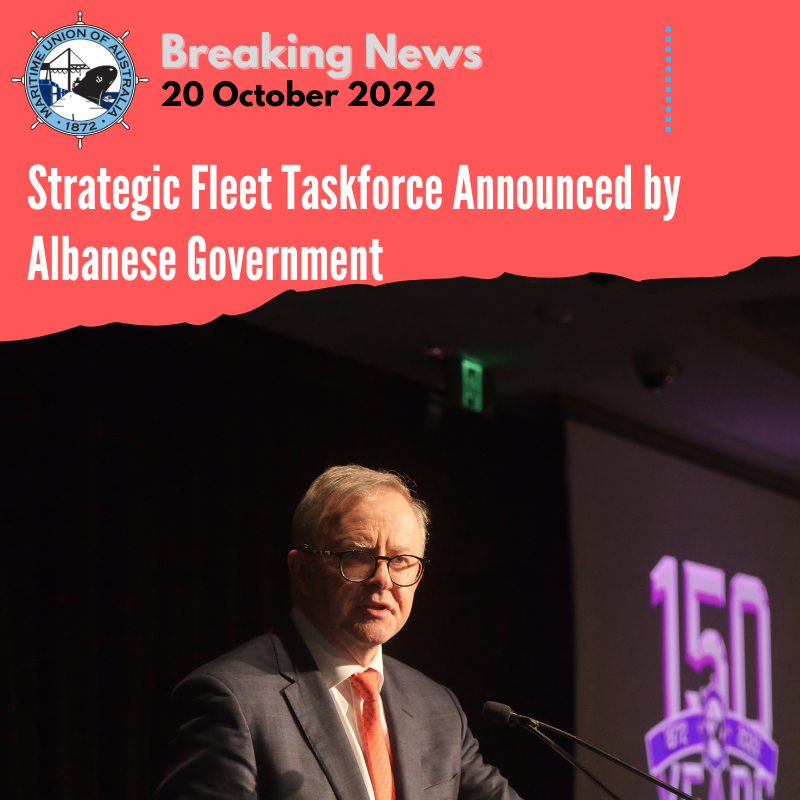 PADDY CRUMLIN
NATIONAL SECRETARY, MARITIME UNION OF AUSTRALIA
PRESIDENT, INTERNATIONAL TRANSPORT WORKERS FEDERATION
MEDIA RELEASE
21 OCTOBER 2022
Strategic Fleet Taskforce announced by Albanese Government
Yesterday, the Albanese Labor Government announced the strategic fleet taskforce, the mechanism through which it will plan and execute its long-term commitment to revitalise Australian shipping.
The Federal Labor Government was elected on a promise to restore Australian flagged and crewed vessels to the Australian coast. This is a hard fought outcome by our members and for our members, for the Australian economy, and in the national strategic interest. We have had the support of seafarers and their unions world-wide and we thank them and the ITF for their solidarity throughout our long campaign.
As maritime workers, we know that building a strategic fleet essentially from scratch is not going to be a quick or simple project.
The Government has established a Taskforce which will bring together the skills and knowledge of unions, industry and the Defence Force to provide expert advice to the Minister for Infrastructure, Catherine King, on how to build up our strategic shipping capacity quickly, effectively and sustainably.
The taskforce will deliver its advice to Government in two phases, with the first phase to report on high-level strategic objectives by the end of the year. This will be followed by a second phase to identify ship options and other needs for a strategic fleet, as well as changes to the Coastal Trading Act, expected to be complete by June 2023.
The Terms of Reference for the Taskforce are now publicly available online here.
All MUA members and particularly the many that were involved in the political and industrial campaign – including our long running Job Embassy on the lawns outside Parliament House in Canberra – know what this announcement means for our industry. The Strategic Fleet policy is a manifestation of the political will and determination of our members, who have watched for 10 years as the Australian shipping sector has been denuded and diminished by the former Liberal and Nationals Government undermining the intent and commitment of the last Labor government to the rebuilding of our Australian merchant navy and our right to work in our own country.
This is a landmark announcement and a victory for Australian maritime workers.
Congratulations again to every comrades who has contributed to this outcome for our industry through their activism, determination, political engagement and industrial participation including in the last federal election to provide this next step in the realisation of those rights.
Our campaign will of course continue to ensure we deliver upon this realisation, including standing alongside the other Australian maritime unions to debunk the lies and misinformation from the many enemies and opponents of our industry and our membership.
ENDS