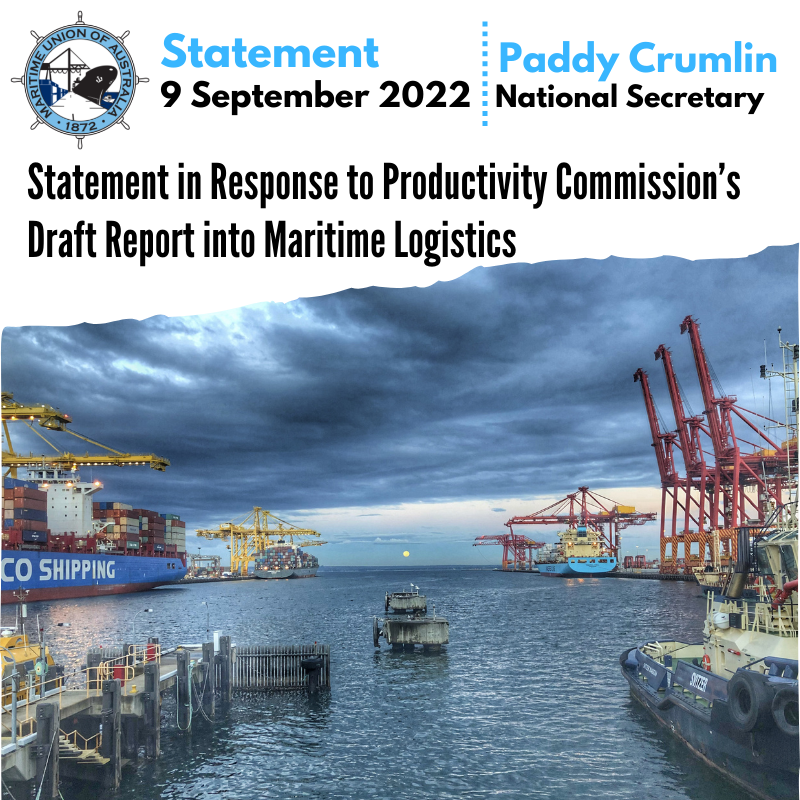 Paddy Crumlin
National Secretary
Maritime Union of Australia
Statement in Response to Productivity Commission’s Draft Report into Maritime Logistics
9 September 2022
At the height of the COVID pandemic, amidst considerable community angst about access to essential imported goods, Scott Morrison and the Liberals tasked the Productivity Commission with blaming Australia’s supply chain crisis on the hard working members of the MUA who work on the Australian waterfront. The former Government did this to provide a smokescreen for their own long-term failures and neglect of Australia’s strategic and commercial interests.
The Terms of Reference for the inquiry were set by the former Government with absolutely no consultation and were framed in such a way as to distort the findings of the Inquiry from day one. The MUA also notes that one of the report’s authors is a former Chief of Staff to Liberal Minister Andrew Robb and was a staffer to Peter Costello during the 1998 waterfront dispute.
This targeted, political attack on the MUA by Scott Morrison has been backed up months later by the deliberate and early leaking of the draft report to journalists from within the Productivity Commission before the document was tabled publicly, an act which immediately calls in to question the credibility and accountability of the Commission and undermines the findings of the report.
Despite maritime workers often being the subject of highly politicised attacks in the media, the reality of working on the waterfront doesn’t match the lies spun by Scott Morrison or Peter Dutton during their period in office or afterwards.
Our maritime logistics system is hampered by long-term failures to invest in transport infrastructure beyond our seaports and by international shipping cartels’ rampant price gouging and timetable manipulation.
Businesses and consumers are paying twice for the failures of the former Liberal Government; through spiralling freight prices and massive delays caused by infrastructure congestion that has nothing to do with stevedoring workers at our ports.
The impact of waterfront workers demanding fair pay, safety at work and job security is inconsequential compared to international shipping price rises of up to 1000% and almost a decade of underinvestment in road and rail infrastructure connecting our seaports with Australian domestic supply chains.
ENDS