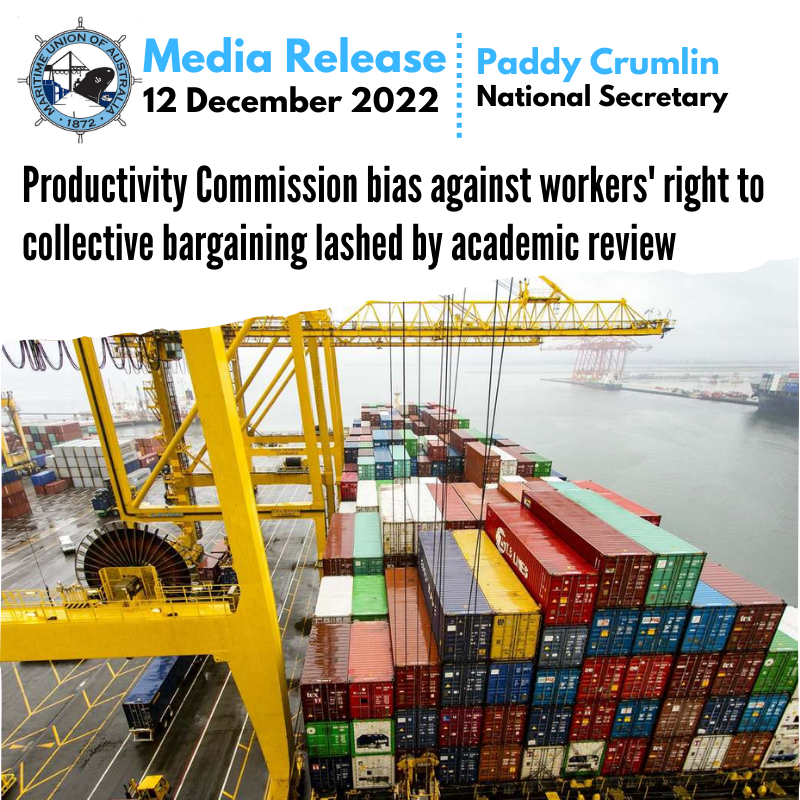 The Maritime Union of Australia has welcomed the findings of an academic review by The Australia Institute and economist Dr Phil Toner of the Productivity Commission’s recent inquiry and draft report into Australian Maritime Logistics.

The Australia Institute report, Lost at Sea, challenges the methodology and conclusions of the Productivity Commission’s analysis of Australia’s container port system and finds that the Commission’s exercise was ideologically motivated and failed to properly interpret its own data.

The Commission’s inquiry into port productivity was commissioned before the 2022 federal election by the former Coalition Federal Government. Its draft report was released in September.

In contrast to the picture painted by the Productivity Commission in support of the former Government’s relentless attacks on trade unions, by several indicators container ports have demonstrated superior and globally competitive productivity performance, including:

“This analysis demonstrates what many have known about the Productivity Commission all along. They were tasked by the former Morrison Government with attacking port workers and blaming them for the supply chain crisis brought about amidst a perfect storm of a global pandemic and the Liberal Government’s years-long neglect and mismanagement of Australian seaports,” said the Maritime Union of Australia’s National Secretary, Paddy Crumlin.

The Productivity Commission’s claims that Australian ports are not ‘technically efficient’ rests on a faulty methodology which assumes that ports should minimise use of productive inputs (including land, capital, and labour) to meet any given volume of traffic. But in the real maritime logistics industry, other criteria – including ship turnaround time, and ability to respond to fluctuations in demand – are more essential for shippers.

“Even the Commission’s own abstract modeling confirms that Australian ports can be as efficient, or more efficient, than global benchmarks,” said Lost at Sea’s author, Dr Phil Toner.

“By more practical measures such as turnaround time, flexibility to accept fluctuations in volume, and safety, Australian ports are both efficient and productive,” he added.

The report was especially critical of the Productivity Commission’s blanket assertion that unspecified industrial relations practices in Australian ports are the source of purported ‘technical inefficiency.’

“The Productivity Commission report provides no hard evidence that workplace practices are reducing productivity in our ports,” Dr Toner added. “Its assertions are unbalanced and reflect an ideological predisposition to blame unions rather than being based on careful empirical analysis.”

Dr Toner’s 50-page report highlights numerous methodological problems and inconsistencies in the Productivity Commission’s analysis of port productivity. It concludes by urging the current Commonwealth government to reject the Commission’s draft recommendation to revise the Fair Work Act in order to restrict collective bargaining and industrial activity in ports and related activities.

“Maritime workers and their families face a constant stream of political abuse from conservative politicians, often as a smokescreen for the failure of port and terminal operators to effectively manage essential, monopoly assets in the public interest. The Lost at Sea analysis shows that the Productivity Commission was used as a political tool by an incompetent and delinquent government in its final, inauspicious months to desperately smear workers instead of taking due responsibility for Australia’s pandemic supply chain crisis,” Mr Crumlin said.