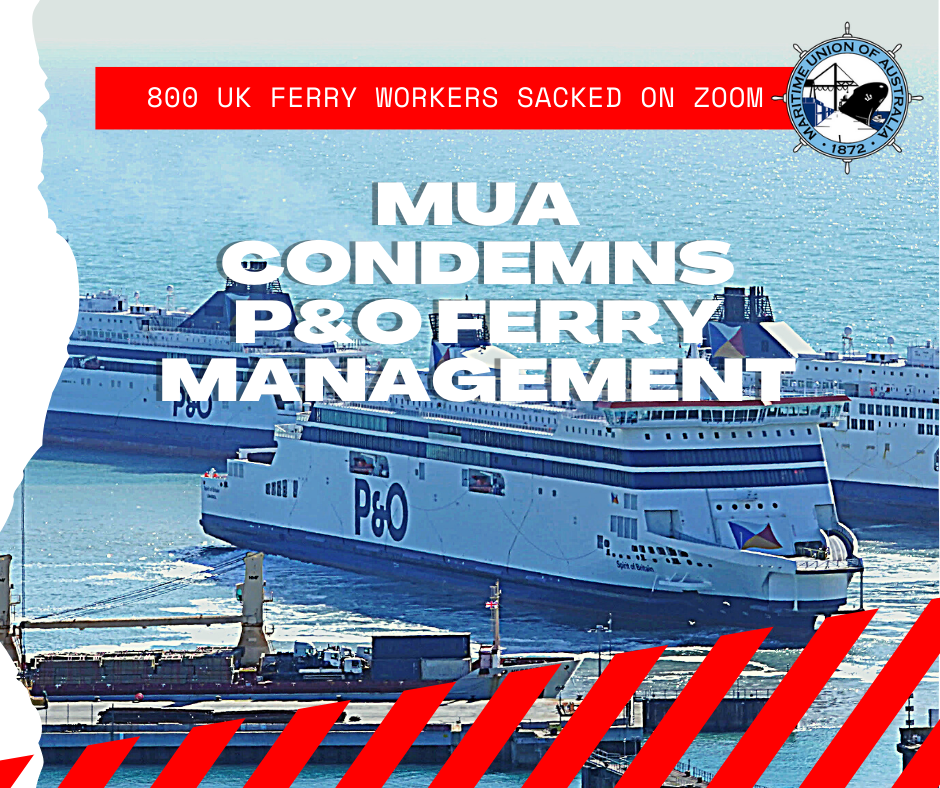 The Maritime Union of Australia is appalled by the callous and unprincipled actions of P&O Ferries management overnight in the United Kingdom, who summonsed 800 employees to a Zoom call to announce their immediate dismissal.

The company, which has been the beneficiary of significant government subsidy and corporate welfare during recent years, has indicated its intention to replace its entire workforce with agency-sourced casual labour on reduced rates of pay, with lower training and safety standards.

MUA National Secretary, Paddy Crumlin, who is also the President of the International Transport Workers Federation, condemned the action and called for immediate intervention to reverse the course of P&O’s management.

“Sacked with less than 24 hours’ notice, these 800 workers were hard working, loyal and committed employees who do not deserve such disgraceful and unconscionable treatment,” Mr Crumlin said.

“We call on P&O’s majority shareholder, DP World, to examine the failures of P&O senior management that have put the company in a position where they can only remain profitable by sacking their entire seafaring staff,” Mr Crumlin said.

“If DP World won’t act to prevent this as the majority shareholder, the UK Government must, because a company that conducts business this way does so without any social licence,” he said.

“Rather than being grateful for the corporate welfare which sustained it during COVID, the company is brazenly thumbing its nose at the very community which supported it with massive sums of taxpayers’ money,” Mr Crumlin said.

Amidst a global supply chain crunch that has already caused massive economic and social upheaval, the actions of P&O Ferries will cause tremendous delays throughout Europe, with a suspension of at least 10 days on the UK – France and Irish Sea routes causing a ripple effect throughout continental Europe that will take months to overcome.

“Not only will this ruin the lives of 800 hardworking seafarers, this act of social and economic vandalism will disrupt hundreds of thousands of people and businesses for months to come at a time when the global economy can least handle it,” Mr Crumlin said.

P&O’s announcement that it would replace the sacked seafarers with agency crew was a clear signal that it intended to slash rates of pay, reduce safety and training standards, and wholly depend on casualised, Fly-On-Fly-Out labour for its seagoing operations.

“The ITF and the Maritime Union of Australia, alongside global transport unions, stands in resolute solidarity with P&O Ferries’ crew and reiterate our call for P&O to abandon this course of action,” Mr Crumlin said.