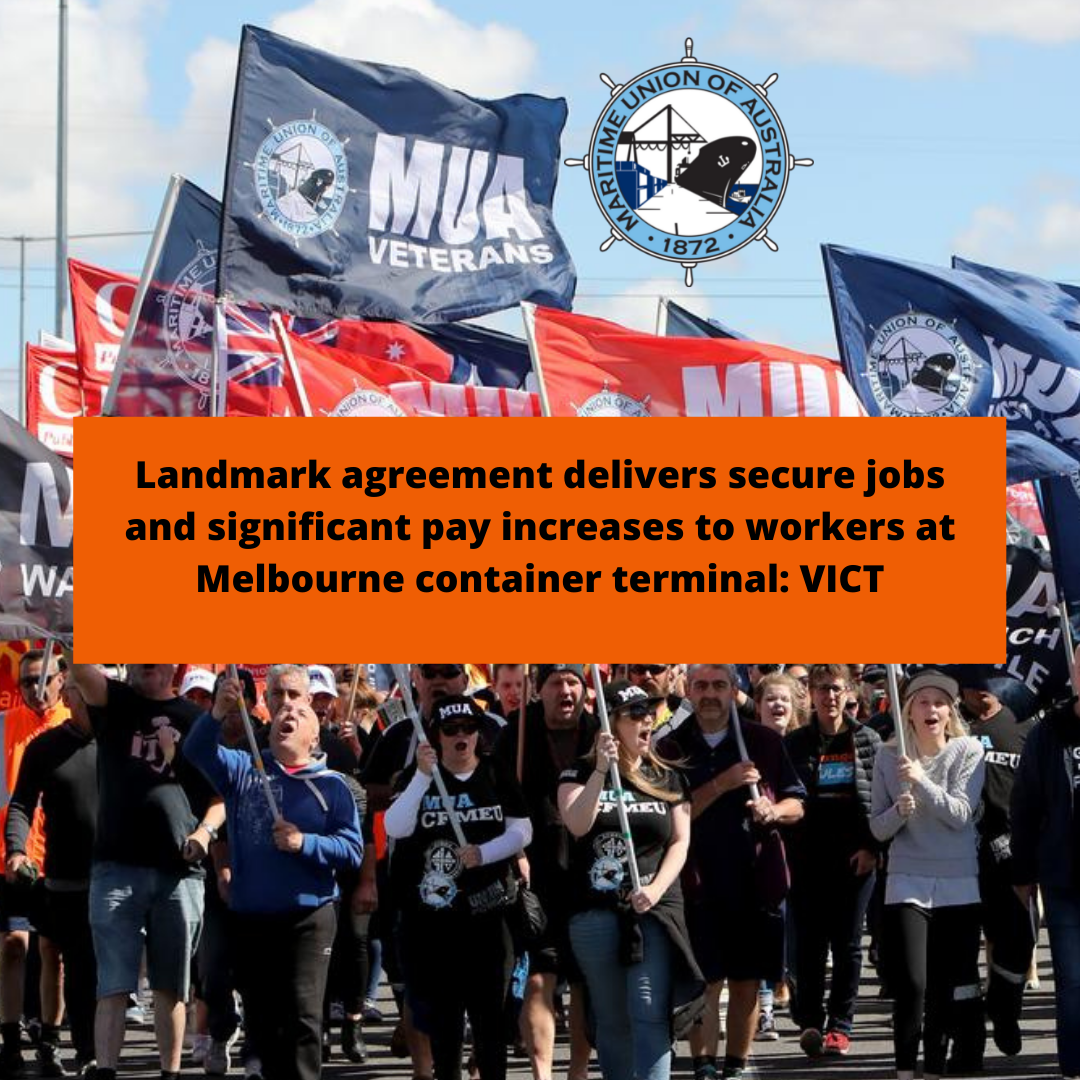 The Maritime Union of Australia said the agreement would deliver immediate benefits to the workforce, with 75 per cent of casual roles being converted to permanent jobs, along with pay increases of between 14.5 and 50 per cent over four years, depending on employment classifications.

The MUA has now finalised agreements with VICT, DP World Australia, Hutchison, and have reached in-principle agreement with Flinders Adelaide Container Terminal, leaving Patrick as the only container terminal operator in the country where the union has been unable to successfully conclude negotiations.

Job security provisions will also prevent VICT from outsourcing, offshoring, or contracting out work covered by the agreement, while workers will have input prior to any forced redundancies.

VICT and the MUA have also settled several long-running legal disputes, with both sides agreeing to terminate the matter to ensure a functional industrial relationship going forward.

“This is the one of the most significant agreements ever struck in the maritime industry, bringing the wages and conditions of VICT workers up to industry standards,” Mr Evans said.

“While it delivers valuable wage rises that will see the pay packets of some workers increase by 46.5 per cent over the life of the agreement, the most significant provisions are around job security and the creation of 61 permanent jobs at the terminal.

“The agreement delivers provisions that protect workers from having their jobs outsourced, sent overseas, or contracted out, along with genuine negotiations before any forced redundancies take place.

“VICT’s reliance on casual labour and excessive overtime were the most significant issues for workers, which is why they took legally protected industrial action to further their campaign for permanent jobs that would provide economic security for their families.

“Without their united voice and commitment to collective action, this agreement with VICT could never have been achieved.”

Mr Evans said the agreement with VICT, which is owned by the Philippine-based global stevedoring company ICTSI, would deliver certainty for Australian business and the general community.

“This agreement follows the finalisation of enterprise agreements with almost all of Australia’s container terminal operators, including DP World Australia, Hutchison, and an in-principle deal with Flinders Adelaide Container Terminal,” he said.

“We have achieved fair agreements that properly compensate workers for delivering record productivity on the waterfront, while also providing certainty for importers, exporters, and the Australian public.

“There is now only one container terminal operator in the country, Patrick, where the union has been unable to reach a reasonable outcome, despite long-running negotiations.

“MUA members at Patrick have never worked harder than during the COVID crisis, putting in place the safety measures that have kept vital supply chains operating, guaranteeing the delivery of medical supplies and ensuring supermarket shelves remain stocked.

“While Patrick has been reaping increased profits on the back of these efforts, along with pocketing congestion and port access charges, they have refused to follow the lead of other container terminal operators and finalise a fair agreement for their workforce.”