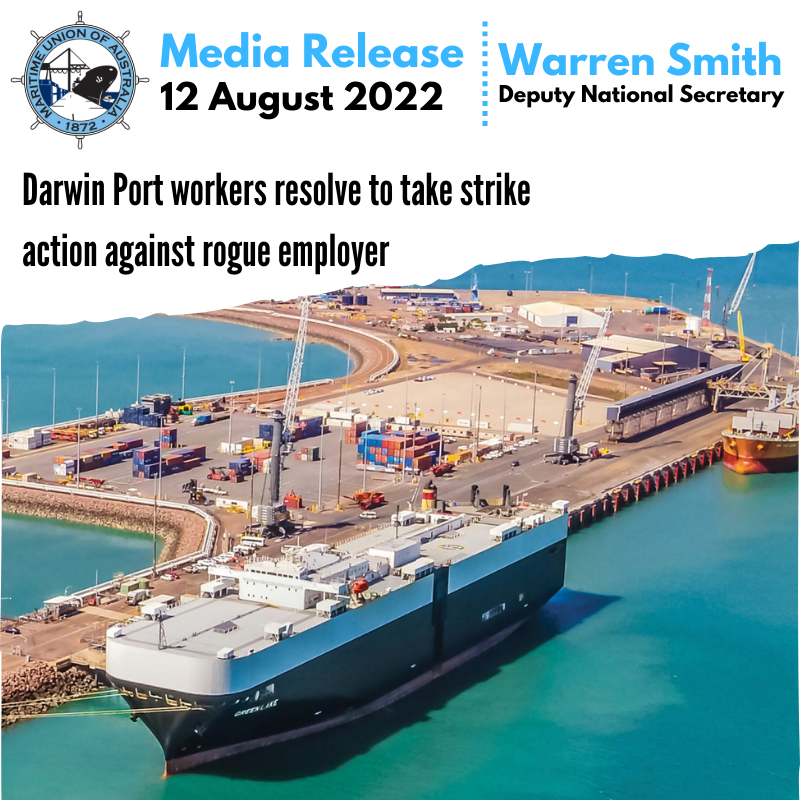 Workers employed by the privately operated Darwin Ports have voted overwhelmingly in favour of industrial action at Australia’s northernmost port, after company management refused again to table a reasonable pay offer or participate in negotiations for a new enterprise agreement.

“The ballot for Protected Industrial Action came back with 99.9% support for this course of action from the workforce and it is a clear demonstration of the unity and determination that exists at Darwin Ports amongst the workers,” said MUA Deputy National Secretary Warren Smith.

The Union has repeatedly sought cooperation and negotiation from the management of Darwin Ports, but this has fallen on deaf ears. The company has so far failed to make good on earlier commitments it had made to the workforce to table a pay offer to form the basis of a new employment agreement.

In the most recent email to management, the union referred to the company’s responsibilities under the Fair Work Act and said that Darwin Ports’ “refusal to table the improved wages offer amounts to a failure to meet [their] good faith bargaining obligation to disclose relevant information in a timely manner…”

“The company has developed a pattern of behaviour here in which delay, distraction and dishonesty have become the norm. The workforce is sick of this and they have resolved democratically to take Industrial Action in the face of it,” Mr Smith said. “We refuse to work harder, longer and for less in the face of skyrocketing cost of living increases. Management and the privateers, on huge wages, are having a privatisation party and expect their workers to pay for it – they will not.”

“The employees of Darwin Ports who kept the community moving through the pandemic deserve wage increases from their employer, not the childish nonsense that the management team has engaged in so far,” Mr Smith added. “If they have a pay offer, let’s see it, and then we can move on to finalising the other aspects of the employment agreement, but to promise it and then hold it back is just rank pigheadedness that undermines their relationship with the workforce,” Mr Smith said.

The notice of Protected Industrial Action sets out the following stoppages and work-bans: