Big Win For MUA at Toll 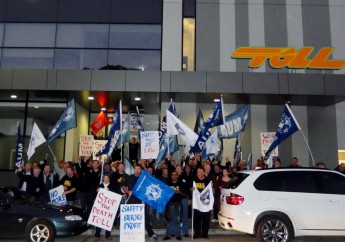 The MUA met with senior Toll management in the aftermath of the death of Anthony Attard. Friday's meeting (27.6.14) was held on the back of the MUA occupation of Toll’s Sydney office on the 18th June by 150 MUA members, many attending the Bulk and General Safety Conference, outraged at Toll’s behaviour in the wake of the Port Melbourne fatality.

A full report is submitted by Assistant Secretary Warren Smith. As well, Smith recommends that members read the analysis of the Behavioural Based Safety (BBS) produced by the ACTU with the apt title, "Big Brother Safety Kit".

The meeting was a times fairly robust and covered considerable ground. It was clear from the outset there was a fundamental philosophical difference between Toll and the MUA around safety although some accommodation may be able to be reached due to our actions.

The main topics of discussion were:

It was made very clear to Toll that matters had been handled reprehensibly over the past few weeks by the company. We expressed our outrage and that of every MUA member that the MAFI trailer involved in the fatality had been welded onto the deck of the replacement charter vessel whilst the Tasmanian Achiever is in dry-dock. The MAFI was secretly moved back into operation after it’s number was rubbed out by the company. The company conceded the matter had been handled extremely badly. The MAFI will be removed and taken away from the operation.

Despite the development of safe work systems management have been over-riding workers on the job in safety critical roles. We have commitments that this will stop. The Victorian Branch will be closely monitoring the situation on the ground in conjunction with the union committee and HSRs.

A managers comment to the workforce about having to move on from Anthony Attard’s death as it was just like an accident on a pedestrian crossing was passed off as being "out of context" by the management team. They did regret the comments and agree it should have been put differently. The fact that they did not offer an immediate and resolute apology for that behaviour was notable.

Regardless Toll have agreed to address the flaws the MUA have raised in their safety systems. The company has committed to ongoing dialogue and engagement with the union committee, HSC and HSRs. These outcomes were previously delivered following the fatality and have now been cemented in place. This is a positive step for workers at Toll.

It is also agreed that any changes made in Melbourne around safety systems will flow on to the Burnie operation.

Toll deny any participation or involvement with the Australian Logistics Council’s attack on NSCOP. The company’s views  were interesting.

This gives us an opportunity to get most of the code agreed by a single employer.

Toll have a straight out and full blown Behavioural Based Safety (BBS) approach. We fundamentally disagree with this approach. Toll admit to all the components of a BBS approach:

Our approach is quite different where we seek engagement and cooperation with workers in developing safe work systems that don’t seek to make safety a disciplinary/industrial issue. We reject the concept that fatalities and accidents are purely the fault of workers performing unsafe acts.

The MUA was invited to attend a Toll Safety Observation training course for their managers. This offer was accepted on the basis of us having the right to pull the approach apart. Toll agreed their system was open to scrutiny.

Toll’s BBS approach will require high levels of job organisation and awareness of the nature of BBSs on the ground. We have beaten this approach through collective activity before and we will have to do it here. National office will coordinate with the Victorian Branch in developing organisation to deal with this.

I have attached an ACTU document on BBS entitled the Big Brother Safety Kit. It provides a very good analysis of the flaws of BBS approaches to safety systems. This document will help workers identify when BBS is being rolled out in their workplaces and advise on how to deal with the matter. These systems can be beaten with strong organised collective activity.

The response from Toll to the occupation on the 18th June was initially angry. The company insisted that we should have rung them and let them know there was going to be a demonstration (!!!).

The managers were told very clearly that they should have rang the MUA and let us know they were going to make a shitty underhanded attack on NSCOP. They were stopped in their tracks on this point and nothing more was said of our successful demonstration which got us to the very top of Toll to press our point.

The next steps are to finalise an agreement with Toll and see how we can work their new found acceptance of the code (or major parts of it) into and continue to develop our campaign for waterfront safety.

Comrades this has been an example of the power of united action. Every branch in the country took Toll on, in their offices, united, disciplined but resolute and angry. We made our point and have demonstrated we are capable of taking our campaign to the streets again. It made a big difference in dealing with Toll’s senior managers and has moved them into making a significant concession around NSCOP.