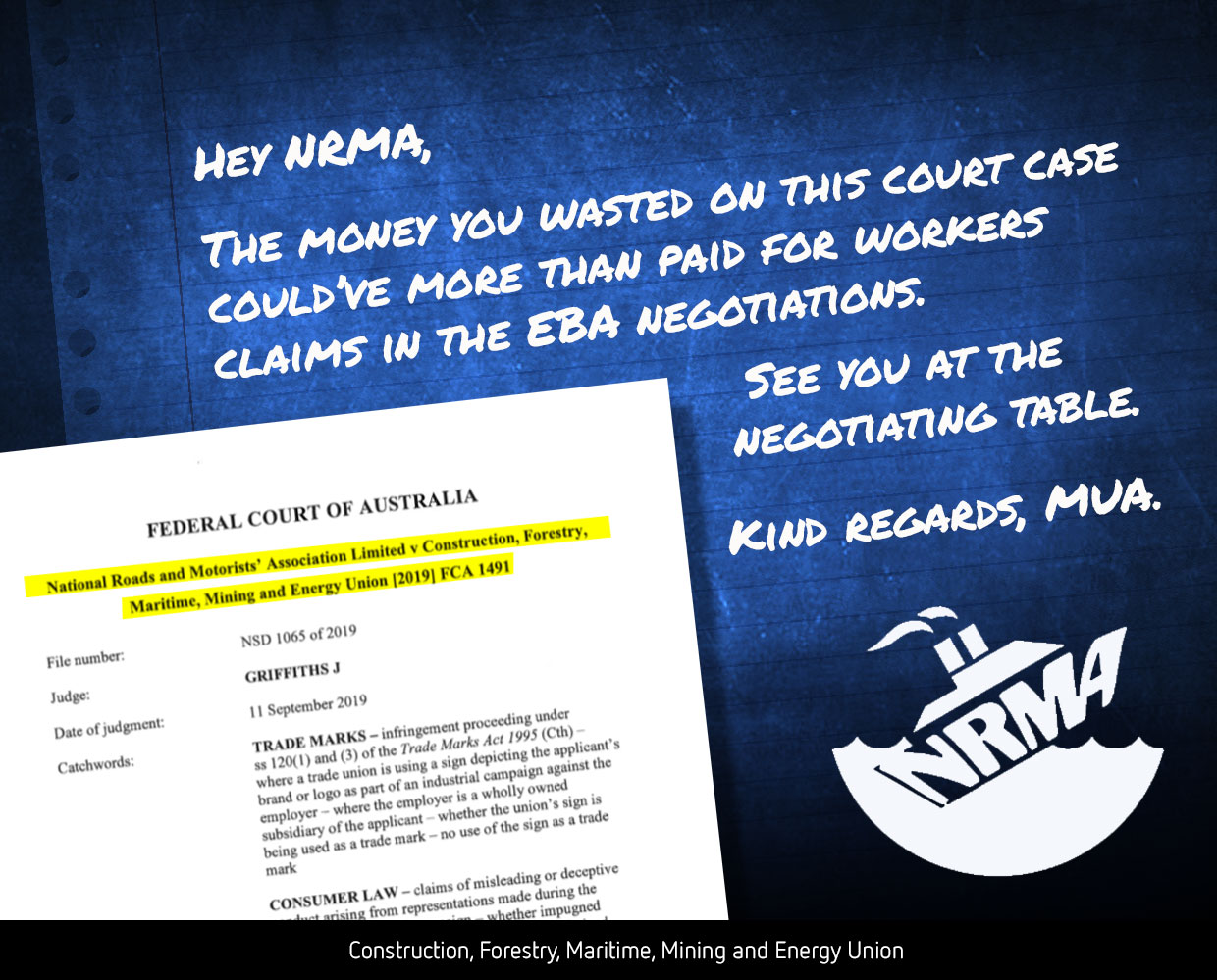 The NRMA has lost a case that could have brought the entire field of IR within the operation of consumer legislation, after it failed to establish that the CFMMEU's maritime division breached consumer laws and maliciously damaged its brand during negotiations for Manly Fast Ferry workers.

The roadside assistance and travel giant sought significant damages against the MUA, accusing it of maliciously using its logo in combination with false and injurious claims during negotiations for a new deal covering the NRMA-owned Manly Fast Ferry fleet (see Related Article).

The union used the "offending logo" – a combination of the NRMA's acronym in lettering similar to its trademark with a graphic of a sinking ferry – on T-shirts, pamphlets, placards, a petition and in social media posts along with phrases such as "NRMA, stop sinking job security".

The NRMA claimed the actions breached misleading and deceptive conduct and false and misleading representation provisions at s18 and s29 of the Competition Consumer Act, plus s120(1) of the Trade Marks Act.

In a Federal Court decision handed down today, Justice John Griffiths said that accepting the NRMA's "position concerning the [Australian Consumer Law] ACL would bring the entire field of industrial relations within the operation of consumer legislation".

"It is highly unlikely that was the intention of either the Commonwealth or NSW State Parliament," he said, noting the Fair Work Act has "specific prohibitions on misrepresentations relating to workplace rights or industrial activities" and "specific regulations governing the conduct of the participants in industrial disputes".

However, Justice Griffiths said he was "not suggesting that there is a global carve out from the ACL of all conduct and activities of a trade union".

As cases turn on their own facts, the "expression 'in trade or commerce' is somewhat chameonlic and does not lend itself to dogmatic prescription", the judge said.

MUA not a business or trade

The company submitted that the union displayed and provided the offending material to people attending an NRMA annual general meeting, as well as potential customers deciding whether to travel on the Manly Fast Ferry or patronise the company's tourist parks.

The union's media releases were also "directed to the public generally, to inform them in deciding whether to become or remain members of NRMA or to patronise any of the NRMA's businesses, or to invest in them", the company contended.

The NRMA further alleged that the union made false statements about safety, low wages and a lack of permanency to "gain an improper advantage", despite its "knowledge of falsity, or reckless indifference as to the truth of statements".

The company said this damaged its reputation and reduced customer numbers.

But while Justice Griffiths accepted that the MUA's offending logo was "deceptively similar" to the NRMA's registered marks and there was a "real likelihood of confusion", he did not accept that the MUA used it as a trade mark to indicate a connection with it.

Rather, he agreed with the union that it was "artificial to regard the MUA's industrial campaign as the provision of a service to its members in the course of trade".

He said the MUA is not a business, does not have a trade and "nor should it be regarded as providing services to its members".

"Functionally, the members are the union," he said, adding that "activities using the offending logo
are conducted by the members of the union for their own benefit, albeit under the auspices of the MUA".

Because Justice Griffiths held that the MUA's actions were not "conduct 'in trade or commerce'," he said this was "a sufficient reason" alone to dismiss the NRMA's claims under both Commonwealth and State consumer law.

Among "additional difficulties with the NRMA's s120(3) infringement case", Justice Griffiths did not accept that those who saw the offending logo would see it as indicating any connection with the NRMA apart from it being the target of the industrial campaign.

Although accepting that the campaign had "as an intended target the NRMA brand" and that some of statements were false – such as suggestions that no employees were permanent when a few were – he said the NRMA did not establish that they were made maliciously or that it suffered actual damage as a result.

He also observed that, while MUA sent an email prior to its action seeking "some graphics that hack the NRMA logo", other emails showed a "genuine concern not to encroach upon the NRMA's intellectual property rights and that steps were taken to minimise the risk of that occurring".

Of the alleged drop-off in passenger numbers, he said the evidence "falls far short of establishing a causal connection between those numbers and the injurious statements and injurious representations".

No need to consider Constitutional issue

The MUA's defence in part relied on the implied freedom of political communication.

However, Justice Griffiths said there was "nothing about this case which would warrant departing from the well-established approach that Constitutional issues should only be determined if the proceeding cannot be disposed of on a non-Constitutional basis".

MUA assistant Sydney Branch secretary Paul Garrett said the union estimated that the Federal Court action would have cost the NRMA "well in excess of $300,000, which is more than the $200,000 a year it would cost to simply pay workers what they are entitled".

He accused the NRMA of trying to "avoid providing workers who operate the My Fast Ferry vessels with job security or appropriate rates of pay, with approximately 95 per cent of the workforce still employed as casuals".