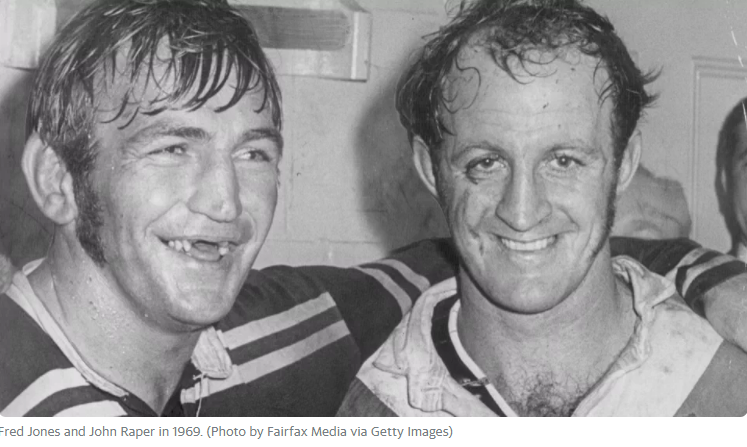 On behalf of the Maritime Union of Australia and our members, officers, and employees, I’d like to pass on our deepest condolences and sympathies to Freddy’s family, friends and colleagues that made up the rich fabric of Fred’s life right to his passing.
I knew him through the union of course but also that crowd of knock around rugby league lifelong lovers who knew and know it’s the greatest sport in the world including your dad Kevin, Kenny Arthurson, Ron Massey and a crew of true believers that were an important part of the establishment of successful change of the modern game.
Freddy was one of those players that took the old game into the innovations of the new out on the field in a manner that generates great memories, total respect and deep affection for his skills, achievements, leadership, and command of the game from the engine room of the scrum and forward play. Those accolades I know are pouring in from many quarters. Tough as teak, his hooter was a testament to a different forwards game and his remarkably long tenure testament to his toughness and courage.
Few of those reports however identify that Fred was a long-time wharfie and waterfront foreman retiring from White Bay in the mid-1990s as a life member of the MUA.
Fred was a union committee member at White Bay and Glebe Island working across the Sydney waterfront prior to working for P&O.
Fred was just one of many Rugby League legends who worked on the waterfront in the playing days when the big pay cheques were yet to come to professional sports people.
Most of yesterday’s professionals were blue collar workers and the “at the time” waterfront flexibility suited many sports people and enabled them to play at the highest level of sporting achievement.
Fred took his leadership from the field to stand alongside his workmates for a better and fairer workplace until his retirement, a great asset with the profile Freddy had in the community in those days. I know the modern game deeply appreciate that the love of the game and the hard commitments that came with it did not come with the financial recognition it deserved.
A Fred Jones story from the Sydney wharves:
The wharfie gang was working down one of the ships hatches and Freddy was with them on that Saturday afternoon, conditions in those days were very poor and labour intensive.
The foreman stuck his head over the working hatch and shouted where’s Jones?
The unimpressed wharfies from the bottom of the hatch shouted back he’s gone to the dunny.
15 minutes later the foreman returned. Where’s Jones?
Covering your mate was an art form in those days and the gang shouts back that Jones was getting some water for the gang and had gone to fill the billys.
15 minutes later the foreman yet again, poked his head over the hatch and shouted, where’s Jones?
The wharfies, running out of alibis yell from below that he had to go and make an urgent phone call down the road.
The foreman retorted to the gang – Well that’s good.
When he gets back tell him he just scored a try at Brookvale Oval.
Vale Freddy Jones. Family man, Rugby League legend, true unionist and bloke of great good humour and courage. Now at rest
Yours Sincerely,
Paddy Crumlin
National Secretary
Warren Smith
Deputy National Secretary