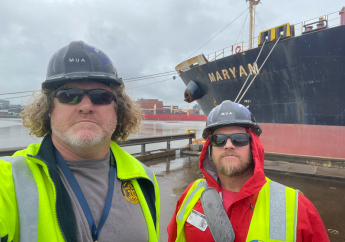 Australian authorities have issued a record ban to the owners of Panama-flagged bulk carrier MV Maryam, preventing the vessel from entering any Australian port for three years in response to major safety and maintenance issues, along with crew welfare abuses.

The ban comes a month after a second bulk carrier owned by the same company, Aswan Shipping, was issued an 18-month ban for similar deficiencies after being detained by the Australian Maritime Safety Authority at Weipa, in far north Queensland.

The MV Maryam was detained in Port Kembla in February after an inspection identified dozens of serious safety, maintenance, and crew welfare breaches. In recent weeks it sailed to Brisbane.

The 23 seafarers onboard were owed tens of thousands of dollars in outstanding wages, while a lack of fuel had left the vessel without lighting, air-conditioning, or power for refrigerators. Urgent supplies of fuel, food and drinking water were delivered to the desperate crew.

The International Transport Workers' Federation said the MV Maryam was now sailing to Vietnam to undertake urgent repairs following the replacement of the remaining crew members.

“After more than three months in detention, with much of that time spent floating off Port Kembla and Brisbane, the remaining seafarers have finally been able to leave the vessel and fly home, with a replacement crew taking the bulk carrier for urgent repairs,” ITF Australia coordinator Ian Bray.

“The situation facing seafarers onboard was absolutely appalling, with the 23 crew members critically short of food, water, and fuel.

“The ITF found that many of the seafarers were working well past the expiry of their contracts, desperate to go home, and owed thousands of dollars in unpaid income.

“The extremely poor state of maintenance was also highlighted when the vessel’s one remaining anchor broke free, resulting in Australian authorities having the crew sail 50 nautical miles offshore to reduce the risk of an engine failure causing the vessel to run aground.

“Throughout the crew’s ordeal, ITF inspectors and local branch officials from the Maritime Union of Australia remained steadfast in their support, providing practical welfare assistance and holding the company to account over their breaches of the Maritime Labour Convention.

“The repatriated crew members have now confirmed that they are safely home and have offered their sincere thanks to everyone in Australia who was involved in assisting them.”

“Australia is one of the most significant users of shipping on earth, with thousands of vessels delivering Australia’s imports and exports, including containerised freight, resources, agricultural products, fuel, and manufactured goods,” Mr Bray said.

“Unfortunately, the situation on these Aswan Shipping vessels is becoming increasingly common, with Australia’s maritime supply chains increasingly reliant on flag-of-convenience vessels, registered in notorious tax havens and crewed by exploited workers paid as little as $2 per hour.

“While the situation onboard the Maryam was particularly shocking — resulting in the crew resigning and seeking support from Australian authorities to be repatriated home — we are seeing a constant stream of similar cases in Australian ports.

“Vessels with similarly appalling labour conditions continue to be used to transport goods to and from Australian ports, forming part of the supply chains of major Australian businesses.

“The Australian Government needs to do more to crack down on these abuses, with more resources for inspections, tougher enforcement of Australian laws and the Maritime Labour Convention, and a tightening of the temporary license system for coastal shipping.

“The situation with these two vessels from Aswan Shipping isn’t a one-off, it’s a systemic feature of the deregulated global shipping industry which is seeing a race to the bottom when it comes to safety, maintenance, and the treatment of seafarers.

“Australia’s economy is built on shipping — with 98 per cent of the nation’s imports and exports moved by sea — which is why the country has an obligation to take stronger action to stamp out the abuses happening in its maritime supply chains.”

About the ITF and ITF Inspectorate
The International Transport Workers' Federation is a democratic global union federation of 670 transport workers trade unions representing over 20 million workers in 140 countries. The ITF works to improve the lives of transport workers globally, encouraging and organising international solidarity among its network of affiliates. The ITF represents the interests of transport workers' unions in bodies that take decisions affecting jobs, employment conditions or safety in the transport industry.
The ITF Inspectorate is a network of 147 Inspectors and Contacts, based in ports all over the world, whose job is to inspect ships calling in their ports to ensure the seafarers have decent pay, working conditions and living conditions on board. They conduct routine inspections and also visit ships on request of the crew. If necessary they assist with actions to protect seafarers' rights as permitted by law.