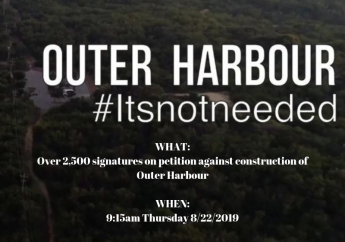 WHAT: Over 2,500 signatures on petition against construction of Outer Harbour

Community petition against the construction of a massive outer harbour in Cockburn Sound gained steam after Westport’s announcement of Kwinana being the only option for West Australia’s future port needs.

With an initial goal of 1,000 signatures launched with a new website going online just over a month ago (www.itsnotneeded.info) members of the community quickly got behind the effort and in total over 2,500 signatures including the Mayor of Fremantle Dr Brad Pettitt will be submitted to the Legislative Council on Thursday August 22nd.

Comments Attributed to the Petitioner and Community Supporting the effort

”I have spent most of my life enjoying Cockburn Sound be it fishing, swimming, boating, or holidaying at our shack in Naval Base with my family. We’ve been getting signatures from people who use the horse beach down near Kwinana all the way up to Woodman’s point. People understand the Sound is in a delicate balance right now and slowly recovering from decades of neglect, building a massive port that our state doesn’t need would tip it over and it may never recover.”

“We put this petition online and started sharing it a few months ago with a goal of gaining 1,000 signatures. Once Westport released their Cockburn Sound destroying shortlist we saw a dramatic uptick in interest from the community”

“The future ports being pushed by Outer Harbour Lobbyists and now Westport, puts bottlenose dolphins, fairy penguins, pink snapper, and sensitive marine habitat at serious risk. We will be organising to save the Sound from this senseless destruction.”

“I didn’t fight to stop ROE8 and save Beeliar wetlands just so this Government could destroy a different sensitive marine environment. All of the port options put forward by Westport would impact the southern portion of the Beeliar wetlands, bush forever sites and our Derbal Nara (Cockburn Sound). We need to protect these sacred places not pave them over.”

“The MUA is proud to stand here and support this petition because our members are part of the community who enjoy the Sound and appreciate the 8,000 jobs in Fremantle the working port currently supports. When experts say publicly that Fremantle could comfortable handle trade volumes for a city the size of Sydney AND we could double current freight volumes without additional pressure on local roads - we have to question the process that excludes Fremantle as a stand-alone operation from consideration.”

Petition to be submitted reads:

I, Alan Nelson of 22 Madras Cres, Port Kennedy WA 6172, cindypengilly@yahoo.com.au, in the State of Western Australia, am the promoter of this petition which contains signatures.

To the President and Members of the Legislative Council of the Parliament of Western Australia in Parliament assembled.

We the undersigned oppose the premature construction of an outer harbour in Kwinana as being actively promoted by some special interest lobby groups in Western Australia. The construction and operation of a new outer harbour facility in Cockburn Sound would forever destroy the sensitive marine environment and the creation of a Special Economic Zone to make the project economically feasible are both are at odds with the values of the community.

Fremantle Port can currently handle trade volumes for a city the size of Sydney and should be allowed to reach its capacity naturally, not closed or capped prematurely to justify the agenda being promoted by special interest lobbyists.

We therefore ask the Legislative Council to go on record opposing the construction of new port facilities until the existing port infrastructure at Fremantle Harbour has reached its full capacity.

And your petitioners as in duty bound, will ever pray.