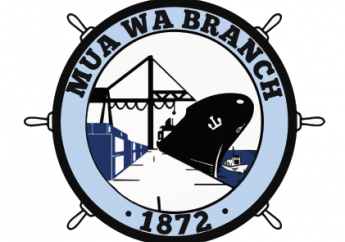 This next update covers off on the industry, along with this Monday’s action against the WA State Government.  Please share this email around and if you are currently in Perth please GET INVOLVED in the MUA campaign for our member’s jobs.

The McGowan Government has announced plans to begin the construction of the Outer Harbour. The WA Branch clearly oppose these plans as “It’s just not needed”.

The Fremantle Port can receive the largest ships visiting any Port in Australia and can service Western Australia’s needs until at least 2055. On recent figures it is Australia’s most productive port. The government plans will result in an automated container terminal costing thousands of jobs in the long run.

This coming Monday, 17th Aug the WA Labour state exec will be at the Perth Mess Hall, 8 Francis Street Perth. We will be there as well.

Buses will be leaving the MUA office at 5 pm sharp. Don’t forget to wear your Union Shirt!

Please send an email to muawa@mua.org.au to confirm your attendance for bus numbers and catering purposes.

Its only takes a minute to do – so please stop reading this report (for now) and get it done.

Today’s Offshore Commission Meeting was another success.  At one point, we had 62 members online from around the country and various vessels.  Many thanks to those who participated and who took the time to be involved in YOUR EBA decision making process.

From the meeting, I can report that the members have again endorsed the motion moved at the last meeting on July 10.

“Members involved in the 10 July 2020 Offshore Commission moved that the Union seek to align the manning agreements expiring this year with the vessel operators expiring in 2022. The new agreements would also see some non-cost claims addressed, minimal cost items, small movement in wages, Manning levels addressed and seek to fix up some of the issues with the current agreements. Should the first employers not agree to our proposal, then we will seek to place a full log of claims upon them and campaign in the normal manner.”

We further reported that subsequent to our first offshore meeting in July Chris Cain, Will Tracey and I have met with the three key manning agents being AOS, OSM and ATLAS.  We presented a log with 16 x key claims including minimal increases, as discussed at the Commission on July 10.  These claims are attached (15 Month LOC 2020).

At the meeting with the manning agents, we also notified them that consistent with the position of our offshore delegates if they do not want to pick up these claims, then we will revert to the normal process of bargaining. With that we then also served each of the employers the full log of claims.  These claims are also attached (OFFSHORE LOC 2020).

At today’s offshore commission meeting, there were a number of motions put to the floor and passed:

Back in December 2019, we had our first Offshore Commission where it was unanimously moved that all permanent offshore employees and all casuals that are engaged for the on and off duty are to pay Grade 14 membership dues.   Today, this motion was debated and altered because of the impact of COVID and a drop off in work. It was moved and endorsed that:

Today’s meeting was a robust discussion on the next agreement campaign and all in all, we have a clear direction from the Offshore membership that the Union will be aiming to deliver.

We have received approximately 100 returned emails with signed Authority forms to Act from members, who we believe have been underpaid by GO Offshore and Swire.  Over the next few weeks, we will be going over each of these forms to get everything in order before approaching the employers.

Once we receive details from Go and Swire, we will be working through each individual record in order to find any possible underpayments.  This will take a while to work through and as such, will be a number of weeks away before closing these matters out.  In any case, if any member has been underpaid, we will be notifying them as soon as we can.

If you haven’t returned your Authority form (copy attached), please fill-in and return to me over the weekend.