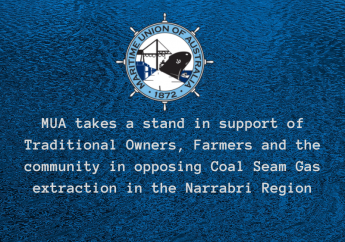 All three NSW Branches of the Maritime Union of Australia announced today that they are prepared to back Gamilaraay Traditional Owners, farmers and the community in opposing Coal Seam Gas extraction in Narrabri with “everything they’ve got”.

Despite sustained local and national opposition, multinational behemoth Santos is pushing ahead with a proposal to build up to 850 Coal Seam Gas wells in the rich soils of the Liverpool Plains, the Pilliga Forest and surrounding areas near Narrabri.

Santos are being backed by Prime Minister Scott Morrison, and through his ‘gas-fired recovery’ the government is proposing to spend millions of dollars to subsidise fracking and coal seam gas projects opposed by First Nations and Traditional Owners.

The Morrison government has already spent over $200 million to support fracking in the Northern Territory over the objections of Traditional Owners. The government is now spending millions on a ‘strategic basin plan’ for Narrabri, $600 million on a gas fired power station due to use Narrabri gas, and is likely to announce even more spending on Narrabri in its National Gas Infrastructure Plan to be released later in 2021. MUA National Indigenous Officer Thomas Mayor said, “The Morrison Governments plans are unviable according to economists, and destructive and dangerous according to Traditional Owners. It’s disgraceful that they are not listening to the experts.”

Sydney Branch Secretary of the Maritime Union of Australia Paul Keating said “the Gamilaraay Traditional Owners could not be clearer in their rejection of this unnecessary and destructive project.  The MUA will stand shoulder to shoulder with these communities, and we vow to fight to defend their right to self-determination over their traditional lands”.

Last year Australia was the world’s largest exporter of gas. This gas is being sold straight into the global market, generating billions in revenue for multinational oil companies. There is very little benefit in terms of domestic gas, jobs, tax revenues and royalties, but an oversize impact on the climate.

“Australia is already awash with gas. We do not need to be running over the top of Traditional Owners in a mad rush to mine the Pilliga.  What we do need is for the Federal Government to build publicly-owned renewable energy so we can rapidly reduce emissions, provide good jobs and a just transition for energy workers.  What we’ve got is a Federal Government that is instead stitching up cosy deals with their mates in mining companies at the expense of jobs and the community” said Glen Williams, MUA Newcastle Branch Secretary.

Australia is the only country in the world that allows its gas to be sold into the global market without keeping reserves aside for the Australian community.  This has resulted in very expensive gas prices despite being the world’s largest gas exporter, putting substantial pressure on local manufacturers.

Research undertaken by the Centre for International Corporate Tax and Accountability Research (CICTAR) demonstrates that, despite billions in annual revenues, Australia’s largest LNG producers pay nothing in corporate income tax and will pay no royalties on the vast new supplies of offshore gas for decades to come.

“We are watching one of the greatest corporate heists in Australian history.  These companies are exporting unprecedented mega-volumes of gas, not paying any tax, driving manufacturing out of the country, and gouging the community.  Now they’re telling us that they need to go and build another 850 wells smack bang on top of Australia’s food bowl against the wishes of the Traditional Owners?  I don’t bloody think so” said Mick Cross, MUA Southern NSW Branch Secretary.

“Working-class people know when we’re being sold a lemon, and I can say with complete certainty that there is a lifetime of lemonade in this cooked idea.  As ordinary people, as unionists, as community members, we will not stand by and let Santos destroy a millennia of cultural knowledge in pursuit of a superfluous, wasteful proposal.  Our Unions in NSW will support Traditional Owners in their fight with everything we’ve got” said Paul Keating.