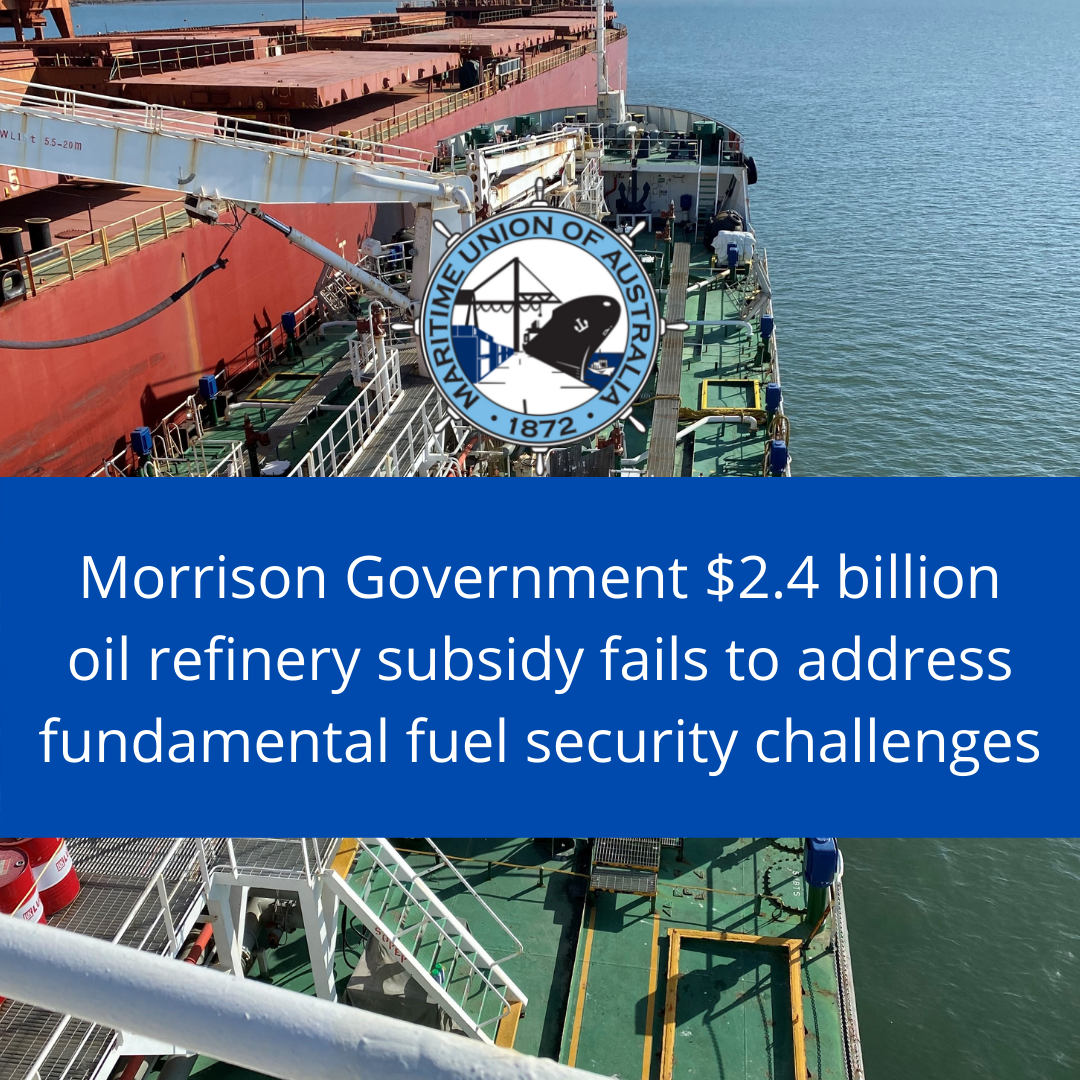 While Prime Minister Scott Morrison’s announcement is good news for workers at the Ampol refinery in Lytton and Viva Energy refinery in Geelong, it fails to address the most significant threat to the nation’s fuel security: the complete reliance on foreign shipping for oil and liquid fuel supplies.

The Maritime Union of Australia said that despite billions of dollars in taxpayer subsidies, the plan would see Australia remain in breach of the International Energy Agency’s 90-day fuel stockholding obligation.

“The Morrison Government is tossing billions of dollars into the pockets of multinational oil companies in an effort to say they’ve addressed Australia’s fuel security crisis ahead of the next election, but the fact is this plan fails to address major threats,” MUA Assistant National Secretary Jamie Newlyn said.

“Australia will still be entirely reliant on a fleet of foreign owned and operated tankers, outside our government’s control, to supply oil to these taxpayer subsidised refineries, and we will continue to have just three or four weeks worth of fuel in the country at any given time.

“If the Morrison Government is serious about delivering fuel security for the country, rather than just making headlines, then it needs to take greater control of how fuel is transported, refined, and stored to ensure our supply chain sovereignty is protected.

“A plan for fuel security requires a policy framework and investment incentives for the development of a Strategic Fleet of Australian-registered large trading vessels, including oil tankers, which would ensure supplies can continue to flow even during a crisis.

“The COVID pandemic demonstrated how quickly an international crisis can impact supply chains, yet the Morrison Government is leaving Australia without the stockpiles of oil and fuel, or the vessels needed to transport these essential goods in the event of a pandemic, military conflict, or economic crisis.”

MUA National Secretary and International Transport Workers’ Federation President Paddy Crumlin said Australia was one of the only countries on earth to rely on maritime trade but not have a domestic shipping fleet.

“When it comes to nations that are reliant on maritime supply chains, Australia is on it’s own in its failure to have a fleet of locally registered and operated large trading vessels to meet domestic needs and offer supply chain sovereignty,” Mr Crumlin said.

“In December last year, the Senate Standing Committee on Rural and Regional Affairs and Transport recommended that the Australian government develop a national security strategy that was supported by an Australian shipping capability to ensure the supply of essential goods is not disrupted during crises.

“Australia’s supply chains are increasingly precarious, in particular with our reliance on other countries to refine and transport the overwhelming majority of our liquid fuel needs.

“Even our strategic reserves of unrefined crude oil remain in the United States, with no plan for how they would be transported during a crisis, while the lack of an adequate domestic stockpile means the country would run out of fuel for transport, aviation, and industry within a matter of weeks.

“Australia is extraordinarily vulnerable to global shocks that could interrupt maritime trade, which is why genuine fuel security can only be achieved if Australia’s supply chain sovereignty is urgently strengthened.”

In a report commissioned by the MUA, ‘Australia’s Fuel Security – Running on Empty’, shipping expert John Francis recommended the retention of a minimum number of Australian owned, managed and crewed tankers, saying it was justified on national security grounds and could be achieved at a minimal cost to end users. The report is available here: https://bit.ly/31cDisq