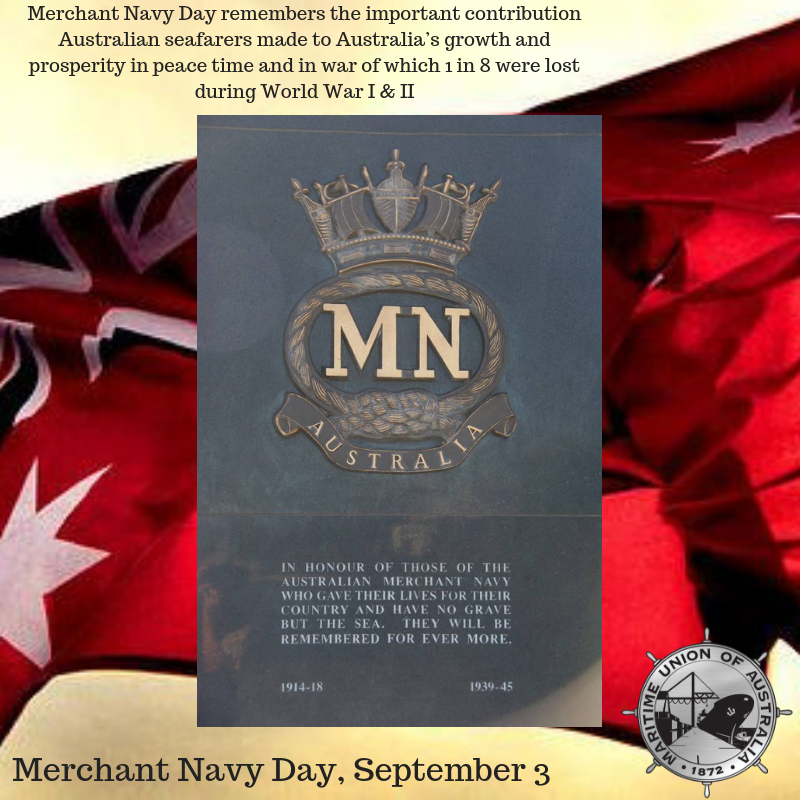 Australians have been urged to pause today to remember the significant contribution seafarers have made to the country’s security and economic success, and the importance of the industry to the nation’s future.

One in eight Australian merchant seafarers sacrificed their lives during World War II — a casualty rate that was higher than those suffered by any of the armed forces — in an effort to maintain supplies of goods and materials vital for the war effort.
Merchant Navy Day is commemorated each year to remember their sacrifice, marking the anniversary of the sinking of the first Allied merchant vessel during World War II on September 3, 1939.

Maritime Union of Australia National Secretary and International Transport Workers' Federation president Paddy Crumlin said that it was also important to remember that these sacrifices continued outside war, with merchant mariners integral to the prosperity of our island nation.

“More than 800 Australian merchant mariners sacrificed their lives for the Allied cause during the First and Second World Wars,” Mr Crumlin said.
“Merchant Navy Day, which this year falls on the 80th anniversary of Australia entering World War II, is an opportunity to honour their lives and remember their fellow seafarers who bravely carried out their duties despite knowing the extreme dangers they faced.
“Just this year, the wreck of the SS Iron Crown was finally located, 77 years after it was sunk by a Japanese submarine off the coast of Victoria, claiming the lives of 38 of the 43 crew.”

Mr Crumlin said it was important to also remember the sacrifices made outside of war.
“While the risks during war were greatly amplified, particularly due to the use of submarines, seafarers continued to make significant sacrifices during peace-time for the sake of ensuring supplies of goods and raw materials to and from our island nation,” he said.

“Just last month, on the 50th anniversary of the sinking of the MV Noongah off Smoky Cape on the NSW mid north coast of NSW, we stood with the family members of the 21 crew who died.”
Mr Crumlin said it was essential to not only remember the past, but also to look to the future, with policies to revitalise Australia’s shipping industry to ensure it is able to continue to support the nation’s economic and national security.
“Without seafarers, Australia’s economy would grind to a halt,” Mr Crumlin said.

“These are the people who transport Australia’s exports, supply the country with fuel and commodities, and ensure the overwhelming majority of everyday products are available to the community.
“In recent decades, the number of Australian-crewed vessels has been slashed, not only costing thousands of jobs, but leaving the country vulnerable to global conflicts or economic shocks that disrupt maritime trade.
“Currently, both Queensland and Victoria are undertaking inquiries into the important role of coastal shipping and the actions needed to strengthen the industry, but we need urgent action at the Federal level to ensure the ongoing viability of the industry.

“During past conflicts, Australian-owned vessels crewed by Australian seafarers were available to ensure our supply lines remained in place, but decades of neglect has seen the industry hollowed out.
“Australia is now almost entirely dependent on foreign flag of convenience vessels, often registered in tax havens and crewed by exploited visa workers on as little as $2 per hour, to supply our fuel, carry our resources, and move cargo around the coast.

“One of the key lessons of World War II was the importance of having skilled, experienced seafarers to maintain supply lines during times of conflict. It is essential that as a nation we don’t forget it.”
Mr Crumlin said inadequacies in our shipping laws had been highlighted recently after the owners of a Panamanian flagged oil tanker escaped penalties for failing to pay the crew the legal minimum wage while carrying out coastal shipping over several years.

“The Fair Work Ombudsman prosecuted Transpetrol, who were operating using a temporary license from the Federal Government, after finding that the crew had been underpaid more than $250,000 while undertaking 10 voyages between Australian ports,” he said.
“While the company eventually paid the wages that were owed, the Federal Court refused to issue any further penalties, effectively giving a slap on the wrist to a company involved in the ongoing, systemic exploitation of foreign seafarers along our coast.
“This prosecution demonstrated once again that the current legal protections that are meant to protect Australian shipping and prevent the exploitation of foreign seafarers are feeble, ineffective, and in urgent need of reform.”