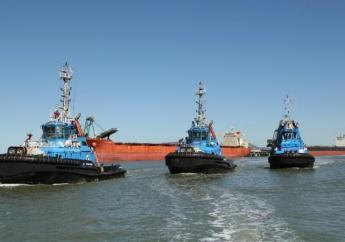 The exclusive provider of towage services at the Port of Gladstone has been accused of using sham contracting to undermine wages, conditions and safety after contracting out a tug delivery job traditionally undertaken by local workers.
Local maritime workers will protest on Friday morning outside the Gladstone office of multinational Smit Lamnalco following revelations that the work traditionally carried out by direct employees had instead been outsourced to a business using half the number of crew members and paying them 60 per cent less.
The Maritime Union of Australia accused Smit Lamnalco, which was last year awarded a five year contract to operate all towage services at the port, of using sham contracting arrangements to undermine the jobs of local workers.
“Multinational towage operator Smit Lamnalco, which operates more than 180 vessels in 30 countries, has brought sham contracting arrangements to Gladstone, undermining the wages, conditions, and safety of local maritime workers,” MUA Queensland Branch Deputy Secretary Jason Miners said.
“The decision to contract out this tug delivery job — work traditionally done by local employees — to a company using half the number of crew members and paying them just 40 per cent of the wages is a shocking attack on local workers and threatens safety standards at the port.
“Smit Lamnalco claimed it supported local workers when it was seeking the exclusive contract to provide towage services at the Port of Gladstone, but the decision to use a shadowy arrangement to avoid paying decent rates of pay or adhere to appropriate safety standards shows the exact opposite.
“Instead, the company has undertaken blatant adverse action against local workers, avoiding the conditions negotiated in good faith into a workplace agreement, without any kind of consultation process.
“If Smit Lamnalco can get away with this sham arrangement it will open the floodgates for any business wanting to avoid wages, conditions, and safety standards put in place following good faith bargaining.
“Shame contracting does not belong in Gladstone, which is why these workers are seeking the support of their local community for their principled stand against this cancerous practice.”