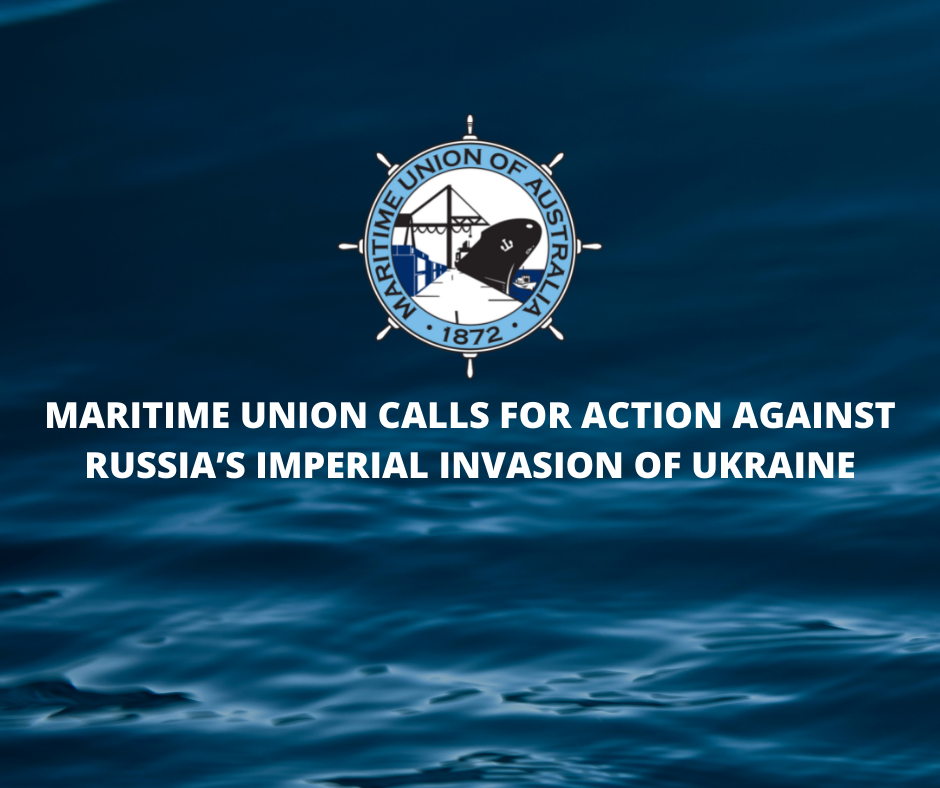 In the wake of Russia’s invasion of Ukraine and President Putin’s reckless attacks on both urban areas in mainland Ukraine and against international seafarers aboard ships in Ukrainian territorial waters, the Maritime Union of Australia has written to the Australian Prime Minister issuing an urgent call for meaningful steps in our own region to place pressure upon Russia’s economic, social, and strategic interests.

We call upon Scott Morrison to enact formal, practical sanctions within Australia’s sphere of influence.

This should take the form of a national embargo on all Russian registered ships or vessels or those which are majority owned or controlled by Russian businesses or individuals, or which may be carrying a predominantly Russian cargo.

The MUA condemns unequivocally Putin’s unjustifiable aggression and invasion of Ukraine, and we extend our solidarity and support to the innocent residents of Ukraine whose lives are imperilled by this completely immoral act of imperialism.

The Maritime Union has a proud history of taking principled stands against global injustices; our rank and file membership are custodians of a long tradition of internationalism and campaigning for peace and justice.

Our union stood up for the sovereign rights of Indonesia and Vietnam, and we took strong action against apartheid in South Africa – the importance of which was recognised by Nelson Mandela in his trip to Australia and his meeting with MUA officials. In more recent years, the maritime support by Australian seafaring members of the MUA for the East Timorese was recognised as strategically significant by General Sir Peter Cosgrove.

Trade unions around the world can attest to the fact that wars are fought using the sacrifice of working women and men and their families on both sides of any dispute. We know that Ukrainian workers and Russian workers alike will be bear the brunt of the violence and unrest that will follow this invasion for many years to come.

We note with concern the images of hundreds of thousands of families fleeing Ukraine with their children to neighbouring countries to escape violence while hundreds of thousands more people stay behind to take up arms to defend their country in citizen militia. This is a truly abominable situation.

For these reasons, we firmly believe that peace is union business. Trade unionists and Maritime Union members have always been at the forefront of peace and international justice campaigns and nuclear non-proliferation efforts.

Likewise, it was the 1938 Dalfram dispute that saw waterfront labourers refuse to load pig iron bound for Japan during the Second Sino-Japanese War in what was to become the build up to World War II.

Wharfies and seafarers then and now understood the social and ethical implications of their work and refused to participate in the export of a product that was to be used to produce arms and munitions they rightfully feared would be later used against Australians.

Of course, during the Second World War that followed soon after, one in eight Australian merchant seafarers lost their lives in service to the nation while working on transport, supply and hospital ships around Australia’s coast. It’s for these reasons the Maritime Union remains cognisant of the service, sacrifice and burden that falls on the shoulders of working people during any war.

Major shipping lines are now enacting trade embargoes with Russia. The two largest shipping companies in the world by TEU capacity – Maersk Line and Mediterranean Shipping Company – have both suspended container shipping to Russia. Elsewhere in the transport sector, this action is complemented by aviation embargoes against Russian civil aircraft flying in European and Canadian airspace.

The International Transport Workers Federation – of which the MUA is an affiliated union – has also condemned Russia’s invasion of Ukraine on behalf of rank and file transport union members around the world. It’s also important to acknowledge that on many merchant ships, Ukrainian and Russian seafarers work side by side in peace, supporting one another in one of the most dangerous and demanding industries in the world.

Likewise, many hundreds of international seafarers are working in waters affected by the conflict, with recent news that a crew of 21 Filipino seafarers were shelled by Russian forces in Ukrainian waters, sustaining massive damage to their ship, the MV Namura Queen. This further underpins the concern our union has that this war, like all wars, will disproportionately affect workers and their families.

Similarly, this is a geopolitical conflict that is not at all the responsibility of Russian working people, and we likewise acknowledge that most Russian people would abhor this violence and more would protest their government’s actions but for the brutal and unjust way in which political dissent is treated by Putin’s regime domestically.

While no global conflict should be used by Australian political actors to score points in the lead up to a federal election, we nonetheless call upon the Australian Government to join other governments around the world in refusing to provide economic succour to the Putin regime.

The Union also asks that the Australian Government continue to advocate for an immediate ceasefire by all parties and for diplomatic solutions to be enacted in line with the position of the United Nations.