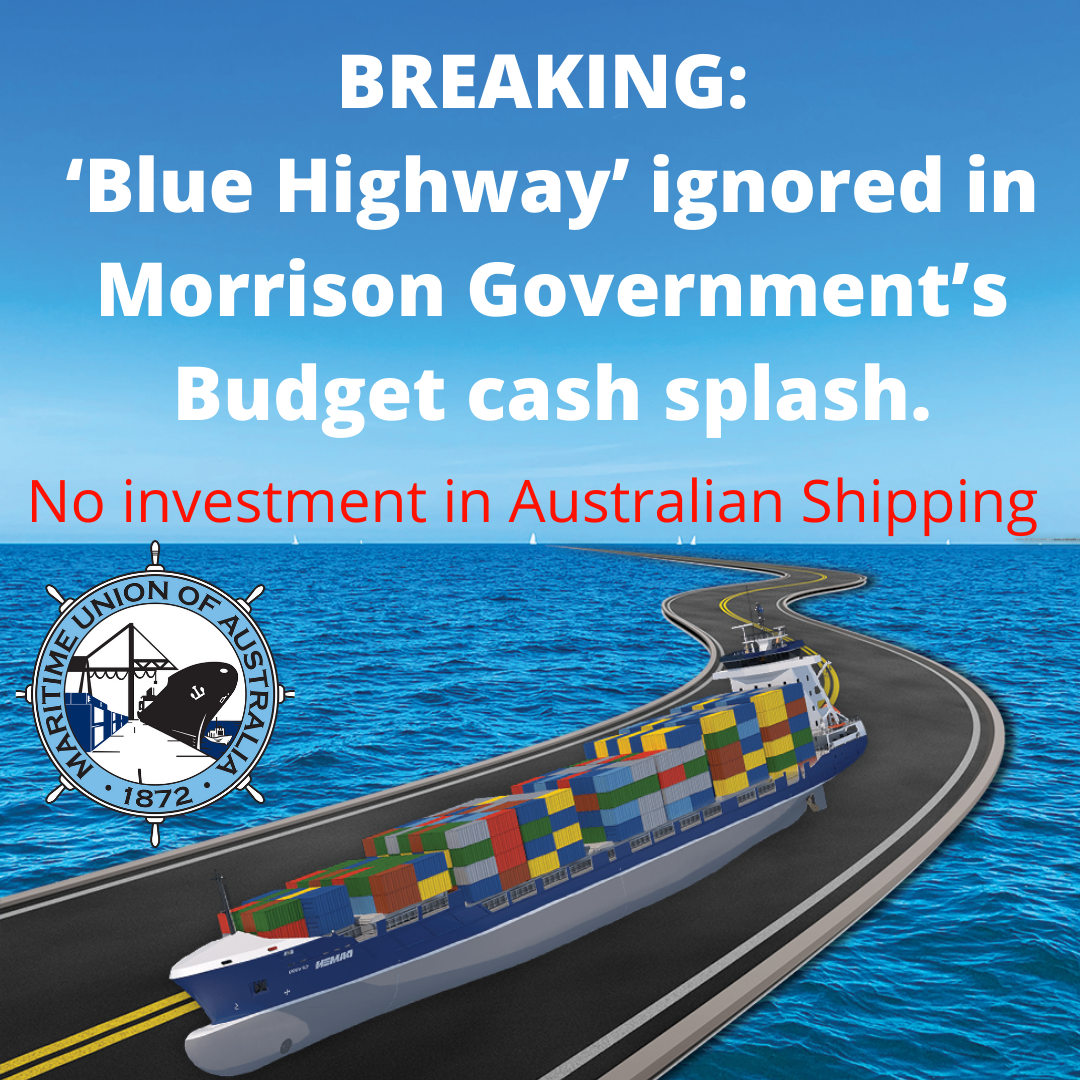 The Federal Government has abandoned the ‘Blue Highway’ — Australia’s maritime supply chains responsible for carrying 98 per cent of the nation’s imports and exports — after the Budget failed to invest in the nation’s shipping industry.

Despite a cash-splash that allocated billions of dollars to road and rail infrastructure, the 2021-22 Budget failed to make any significant investment in the shipping industry, which is integral to Australia’s economic prosperity as an island nation.

The Maritime Union of Australia said the Morrison Government had revealed once again that it was unwilling or unable to provide the investment and strategic direction needed to revitalise Australia’s maritime sector.

“Ten per cent of the world’s sea trade passes through Australian ports, with ships taking our commodities and manufactured products to the world, delivering fuel and essential goods to Australian consumers, and moving materials around our long coastline,” MUA National Secretary Paddy Crumlin said.

“The COVID-19 pandemic highlighted just how vulnerable these maritime supply chains are, and how vital they are for keeping Australia’s economy moving, yet the Morrison Government has again failed to make any significant investment in the industry.

“While Deputy Prime Minister and Transport Minister Michael McCormack is busy promoting billions of dollars in road and rail investment, he has gone missing on the largest contributor to Australia’s freight sector, shipping. A long term vision needs to take all transport modes into account.

“The Blue Highway is the backbone of Australia’s economy, yet since the election of the Coalition Government in 2013 more than half of the Australian ships that carried cargo between our ports have been lost, taking with them more than 500 direct seafarer jobs.

“In their place are thousands of foreign ships, registered in tax havens, crewed by exploited workers, which take billions of dollars out of our economy.”

Mr Crumlin said there was growing consensus across the maritime industry that the Federal Government needed to urgently formulate a comprehensive strategy for Australian shipping.

“The maritime industry is demanding an integrated national transport policy that levels the playing field and ensures fair competition among all transport modes, rather than a Federal Budget that pours billions into road and rail projects while ignoring shipping.

“Short sea shipping for domestic use is a critical component of supply chain investment, with proven success around the world of its versatility and flexibility in developing more efficient hubs in the face of congestion and urban development.

“It’s time for the Federal Government to take the blinkers off when it comes to the importance of domestic shipping, otherwise Australia will continue to be left with a flawed and outdated model that is designed for a different distribution and fueled by tax evasion and labour exploitation.

“In addition to freight movement, emerging industries like offshore wind will require specialist vessels and highly-skilled maritime workers to undertake construction and maintenance work, which the Federal Government should be investing in now.

“Money should also be devoted to the creation of a national strategic fleet, consisting of dozens of large commercial trading vessels to carry fuel, containers and bulk goods between Australian ports, and transport Australian exports to international markets.

“This could be achieved by providing incentives to Australian companies to own and operate Australian-flagged vessels through better design of the tax system and a tailored industry policy support package.

“Making Australia a regional centre of maritime commerce would not only boost the nation’s economic prosperity, it would contribute to regional security at a time of growing tensions.”